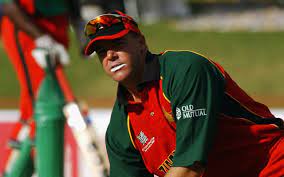 Former Zimbabwe captain Heath Streak has been banned for eight years after being charged with - and admitting to - five breaches of the ICC's anti-corruption code, including accepting a payment in bitcoins from a potential corruptor.

Streak, Zimbabwe's greatest fast bowler, had been under investigation for an extensive list of games through 2017 and 2018, during his post-playing career as a coach, from his time in international cricket - with Zimbabwe from 2016 to 2018 - as well as stints in T20 leagues including the IPL, the BPL and the Afghanistan Premier League (APL).

The charges paint a picture of Streak as a facilitator of approaches by a corruptor to people within teams he was a part of. But they also include one charge of disclosing inside information pertaining to matches during a 2018 tri-series involving Zimbabwe, Bangladesh and Sri Lanka, a Zimbabwe-Afghanistan series in 2018, the 2018 IPL and the 2018 APL.

Streak was also charged with facilitating or attempting to introduce four players - including a national captain - to a potential corruptor. The three other charges revolve around his failure to disclose receiving gifts or payment in lieu of this facilitation, the failure to disclose potentially corrupt approaches in the 2017 BPL, and, in 2018, the PSL, IPL and the APL. Those gifts include accepting two bitcoins - converted eventually into US$ 35,000 - from the potential corruptor identified in the ICC's investigation as Mr X. At the APL, Streak was also gifted a new iPhone for this wife, both of which he failed to disclose to ICC anti-corruption investigators.

Although he is believed to initially have contested the allegations, Streak eventually admitted to the charges and agreed to the sanctions. He is now banned from all cricket activities and would be free to resume his involvement again on March 28, 2029.

"Heath Streak is an experienced former international cricketer and national team coach, who had participated in numerous anti-corruption education sessions and was fully aware of his responsibilities under the Code," the ICC's anti-corruption head Alex Marshall said in a statement. "As a former captain and coach, he held a position of trust and owed a duty to uphold the integrity of the game. He breached the Code on several occasions, including facilitating the approach of four other players. At times, he also sought to obstruct and delay our investigation.

"The offences did not affect the outcomes of any relevant matches and Mr Streak has agreed to assist the ICC anti-corruption education programme for which we are grateful. He has also expressed his remorse and contrition and entered this agreed sanction decision to avoid the need for a full disciplinary process. The sanction reflects this cooperation."

Members of the Zimbabwe cricket-playing community expressed their shock and sadness at the update, with reactions ranging from "I'm blown away" and "I am genuinely shocked", to "It's a kick in the teeth for Zimbabwe cricket and the current crop of players - not only that, but now to regain trust is lengthy process."

David Coltart, the former Zimbabwe sports minister, also expressed his anguish on Twitter, saying "there can be no excuses for this type of behaviour".

There can be no excuses for this type of behaviour. Corruption has deeply affected #Cricket internationally and within #Zimbabwe and must be ruthlessly rooted out wherever it is found. That said I stand ready to assist Heath redeem his otherwise outstanding record & contribution.

Zimbabwe Cricket (ZC), meanwhile, welcomed and endorsed the ICC decision, calling it a "very sad and shameful episode that might well go down in history as the darkest day in Zimbabwean cricket".

"Streak was a powerful figure adored by many and held up as an idol for future generations of cricketers. In doing this, he held a position of trust and owed a duty to uphold the integrity of the game," a statement, signed by ZC chairman Tavengwa Mukuhlani, said. "But, as we and the rest of the world now know, Streak was also a corrupt, greedy and selfish character who regrettably abused his status and position in pursuit of dirty benefits.

"While we have been left to pick up the pieces from the damage, it is our hope that the punishment meted out on Streak will help to reinforce the measures that the ICC and ZC have been taking to root out any wrongdoing in cricket. The integrity of ZC and the sport itself is of paramount importance and, therefore, the need to maintain high levels of honesty and professionalism at leadership and all levels of the game cannot be overemphasised."

Meanwhile, Zimbabwe's sports and recreation commission has requested the country's national prosecuting authority to "ascertain whether any of the criminal laws in Zimbabwe, particularly those relating to corruption, have been breached by Heath Streak in order that appropriate action is also taken locally". Saying that the body has zero-tolerance for corruption in sport, the commission has "fully supported and endorsed" the action on the part of the ICC.

The sanctions will come as a shock to many given his status as one of the greatest players Zimbabwe has produced. He was a major figure in the national sides of the mid-to-late 90s, a period in which they enjoyed their greatest successes. He remains the only Zimbabwean bowler with more than 100 Test wickets (he has 216) and the only Zimbabwean with over 200 ODI wickets (237). Streak captained Zimbabwe as well in the 2000s, during a difficult period when a number of players withdrew from the national side and as relations between the board and team hit rock bottom.

He has since remained in cricket as a coach, with stints as bowling coach of Bangladesh and multiple stints with Zimbabwe. He was also bowling coach for the Kolkata Knight Riders in the IPL.

2.3.2 - disclosing inside information under both the ICC code and various domestic codes, in circumstances where he knew or should have known that such information may be used for betting purposes. In particular, he disclosed inside information in relation to matches in the 2018 tri-series involving Zimbabwe, Bangladesh and Sri Lanka, the Zimbabwe vs Afghanistan series in 2018, the IPL 2018 and the APL 2018.

2.3.3 - directly or indirectly soliciting, inducing, enticing, persuading, encouraging or intentionally facilitating any participant to breach the code. In particular, he facilitated or attempted to facilitate the introduction of four different players, including a national captain, to someone he knew, or should have known, may have wanted to approach them to provide inside information for betting purposes.

2.4.2 - failing to disclose the receipt of any gift, payment, hospitality or other benefit that the participant knew or should have known was given to them to procure a breach of the code or that was made or given in circumstances that could bring the participant or the sport of cricket into disrepute.

2.4.4 - failing to disclose to the ACU full details of any approaches or invitations received to engage in corrupt conduct under the code including in relation to international matches, matches in the 2017 BPL, the 2018 PSL, the 2018 IPL and the 2018 APL.

2.4.7 - obstructing or delaying an investigation, including concealing, tampering with or destroying any documentation or other information that may be relevant to that investigation and/or that may be evidence of or may lead to the discovery of evidence of corrupt conduct under the ICC Anti-Corruption code. ESPNcricinfo