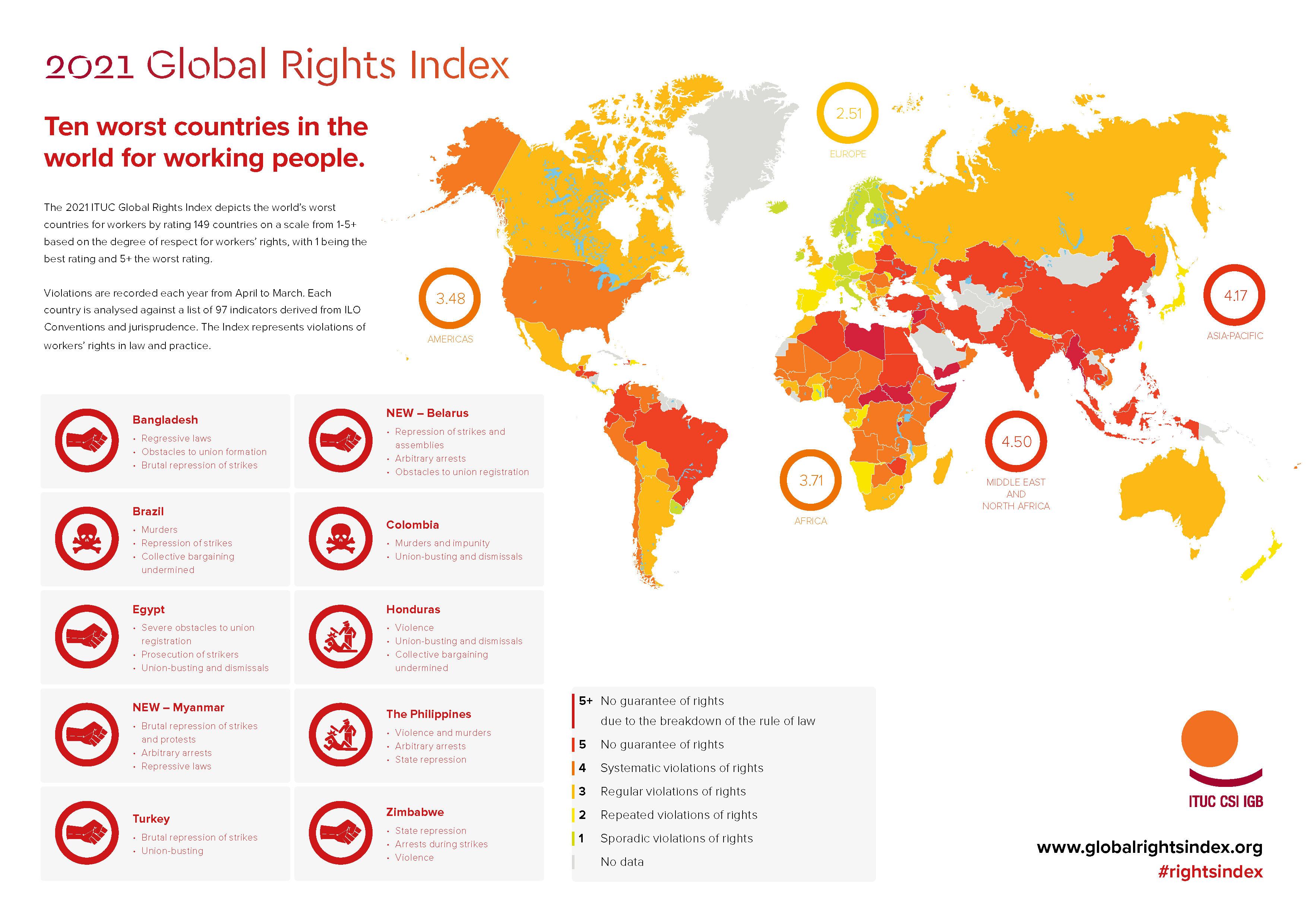 Zimbabwe has been ranked among the top ten countries that are hostile to workers.

According to the report, the country has had a record of harassing trade union leaders making it hostile and hard for workers to vent their grievances. In recent times, Zimbabwe registered the harassment of leaders representing teachers, doctors, and those of other workers’ unions in general. In some cases union leaders are arrested, abducted and tortured by alleged state agents, with the government professing ignorance or accusing them of stage managing the acts.

Zimbabwe has for over a decade been on the radar for failing to adequately reform repressive laws whose provisions have been instrumented to ban and interfere with trade union gatherings under the repealed Public Order and Security Act (POSA) regulations on public gatherings were still in force under the new Act, the Maintenance of Public and Order Act (MOPA).

The ZCTU has annually reported the government to the International Labour Organisation (ILO) which in 2009, dispatched A  commission of inquiry  that was set up to investigate grave complaints of abuse of workers’ rights. The complaints were filed by both workers and employers’ representatives at the ILO LABOUR Conference in 2008.

It said “The commission sees a clear pattern of arrests, detentions, violence and torture by the security forces against trade unionists that coincided with ZCTU nationwide events, indicating that there had been some centralised direction to the security forces to take such action”.

The Commission made seven recommendations that yet to be fully implemented.

The ZCTU maintains that, over a decade after the recommendations there were still grey areas and visible trends of regression.

According to the ZCTU, there has not been any meaningful progress on most recommendations since government had not shown seriousness towards abiding by the ILO recommendations and sometimes acted at the eleventh hour towards the annual ILO General Conference.

From 2008, the ZCTU has reported serious violations against the government which included a police crackdown on ZCTU demonstrations in which workers were demanding the payment of their salaries. On 8 August 2015, police besieged the ZCTU offices in Harare, arresting trade union leaders in order to stop an announced demonstration clearly imposing practical restrictions on workers’ rights. In October 2018 the police disrupted a ZCTU demonstration against the imposition of the two percent transactional tax and in January 2019 the ZCTU President Peter Mutasa and Secretary General Japhet Moyo were arrested for organising a national stayaway against rising inflation.