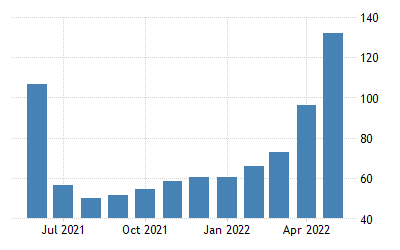 The Zimbabwe Congress of Trade Unions (ZCTU) has demanded that all workers be paid in USD due to government’s laxity to contain the rising inflation which has pauperized workers as prices of basic commodities and services are out of reach for the majority who earn in local currency.

In a statement issued by the ZCTU Acting Secretary General Runesu Dzimiri, the labour federation said the galloping inflation which was officially at 131.7% as at May 2022, was the second highest inflation rate on the African continent and it was high time government was proactive in arresting the scourge.

“Inflation has reached alarming levels and the current fiscal measures have failed to tame it. Workers have borne the disproportionate brunt as wage increases have lagged inflation. Many workers have been relegated into the working poor. The inflationary tax has eroded workers’ wages. The only stability that can be administered to stop the bleeding is to fully dollarize the economy. It is in this vein, that the ZCTU is calling for the urgent convening of the Tripartite Negotiating Forum (TNF) whose sole agenda would be to discuss the issues of rising prices and the erosion of workers’ salaries.

“The high inflation has resulted in the skyrocketing prices of goods and services while salaries and wages remain suppressed, but it seems the government remains unfazed. Of note is the price of daily basic commodities like bread, cooking oil, fuel, and transport fares which are out of reach for the generality of the population while the government is practically doing nothing to contain the situation. In recent months, the cost of living has risen to unprecedented levels and we demand that the government take a bold step to correct the situation and cushion the consumer,” read the statement.

The ZCTU flagged out the recent services fee increases and reviews to charge in USD by the Zimbabwe Schools Examination Council, most government departments and public hospitals which are used by the poor.

“The moves are a direct confirmation that the nation has dollarized but salaries remained pegged in RTGS. The government and employers must wake up to the reality of dollarization and pay workers living wages in a stable currency. Workers and citizens no longer afford even the barest of basics like bread, the average bread basket is well over RTGS 130 000-00 when the minimum wage set by the government is at 25 000–00 Zimbabwean dollars per month. The government must set a minimum wage based on the consumer basket and it must be in United States dollars,” said ZCTU.

The labour body said due to chronic high inflation, economic agents have lost confidence in the Zimbabwean dollar and workers who earn in local currency were the most affected as they have to go to the parallel market to exchange their salaries for the USD at a loss.

“The ZWD can no longer effectively fulfill the major functions of money. The economy most of which is informal, is now dollarised. We call upon government to take a proactive approach to tame inflation and prioritize the general welfare of the citizenry. The current situation has become unsustainable and can be a catalyst for civil unrest. The economic instability is also known to contribute to mental health challenges at the workplace and this will have serious negative repercussionS on both production at the workplace and the Gross Domestic Product (GDP),” said ZCTU.