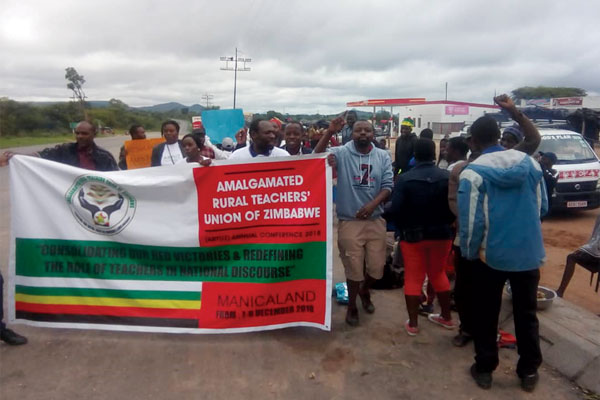 THE Zimbabwe Congress of Trade Unions (ZCTU) has vowed to escalate the quashing of the teachers’ demonstration to the Tripartite Negotiation Forum (TNF).

The developments come against a background when the government moved to confer a constitutional obligation in 2019 to the social dialogue platform as opposed to just a caucusing platform in the past years.

Speaking to NewZimbabwe.com ZCTU secretary general, Japhet Moyo said the TNF will be taken to task over the recent brutal arrest of members of the Amalgamated Rural Teachers Union of Zimbabwe (ARTUZ) during a flash demonstration last week.

“Remember we now have a legislated TNF and this is a platform which we will resort to in our continued to end unjustified police brutality to end harassment of workers. This is a platform we will use to direct the government to seriously engage the Zimbabwe Republic Police officers so that they know how to conduct themselves when dealing with workers,” he said.

Moyo said incidents of this nature against workers continue to be the order of the day despite the fact that the government has been hauled before the International Labor Organisation’s Committee on the Application of Standards.

“The right to peaceful demonstration is enshrined in our Constitution, the Labour Act and it is one of the International Labour Organization (ILO) core Conventions. Protests are at the very heart of all labor movements the world over to push for social justice at the workplace,” he said.

The ZCTU secretary condemned all forms of police brutality against trade unions and called upon authorities to let unions do their work.

“We demand the unconditional release of all those who have been arrested. The ZCTU believes this is an attack on workers Constitutional right to demonstrate and petition. This is an attempt to silence and scare workers to partake in any future demonstrations,” added Moyo.