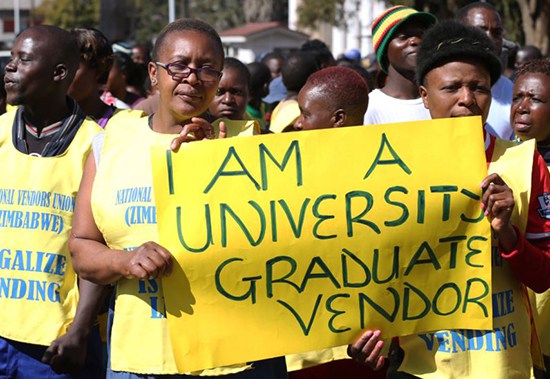 ZIMBABWE urgently needs to create 184 000 jobs per year in the next decade in order to cut down the unemployment levels and informality bedeviling the nation , a recent study by the International Labour Organisation (ILO) has recommended.

The study titled, “Zimbabwe: Putting Jobs at the Center of the Struggle” established that the Southern Africa nation will see an upsurge in job demand as the population swells.

The report concludes that the working age population in Zimbabwe is expected to continue to grow relatively fast, thus adding pressure on labour markets and increasing further the risk of unemployment and informality.

If participation rates do not increase, the labour force would be growing at the same rate as the working age population.

The report states that the job creation rate would decline slowly, from 2,6 percent per year today to 1,8 percent  per year.

The study suggests that in order to keep the current employment rate constant at 83 % the economy would need to create around 135,000 jobs per year over the next 30 years.

“If during the simulation period participation rates for women increase to the same level as those of men, the growth rate of the labour force would be around 0.7 per cent faster and the economy would need to create an average of 200,000 jobs per year,” the report added.

However, labour market watchers doubt Zimbabwe’s capacity to rise to the occasion as they blame misdirected economic policies which are pursuing a capitalistic agenda which lacks a job growth trajectory.